How To Think Like A Financial Advisor When Playing Roulette 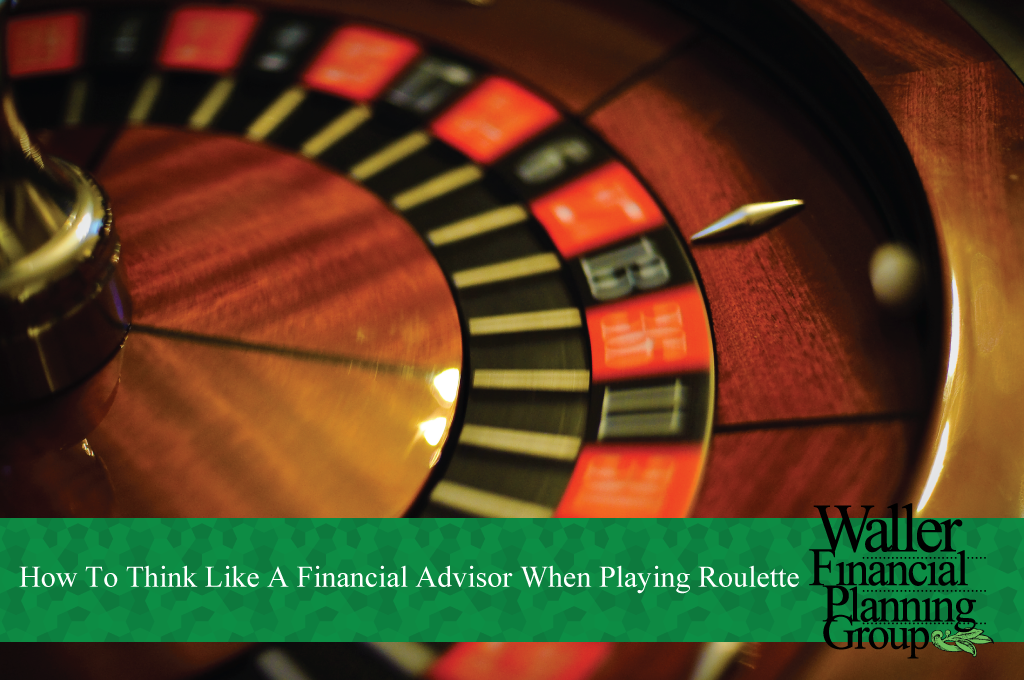 I attended the American Institute of Certified Public Accountants (AICPA) Advanced Personal Financial Planning conference. Interestingly, the conference is held at the Bellagio in Las Vegas, Nevada, also known as Lost Wages, Nevada. There is a bit of irony in AICPA holding a financial planning conference in Las Vegas, but I digress. I arrived Saturday evening, and had a few hours to waste before turning in for the night, so I decided to head down to the casino.

Since I’ve been in the finance industry for 17 years, I typically don’t gamble with my money, but since I was in Las Vegas I wanted to see what all the buzz was about. I decided to head over to the roulette wheel, since I am not familiar with many gambling games. My naïve understanding of roulette provided some unwarranted confidence. I stood back, and listened to the gamblers; they were talking statistics, and my ears immediately perked up, but they did not have a good grasp of the subject matter; the digital board showed the last nine rolls had landed on black, and I heard one gentleman say the next spin would have a probability of 90% red. The truth is the probability of the next spin is independent of the previous spins, and is the same every time at about 47% red or 47% black (don’t forget about the two green slots.) The ball landed on black 8. A lot of money was lost for those who bet on red.

At this point, I decided to enter the game, thinking I am more rational because I majored in finance– I will clearly not lose money. I placed a whopping $15 minimum bet on black, as did a few others; Black 22. I was ecstatic about winning on my first try. Random people walked by, stopped and placed bets on red; ball landed on Red 12. Quite a few happy people yelled.

I have studied behavioral biases extensively, and seemingly all of them were on display. In hindsight, I am fascinated by this – both on a basis for assessing others and assessing myself. In the investing world, there are two general categories of biases: emotional bias and cognitive bias;

Emotional biases are due to acting on feelings versus facts.

Cognitive biases are due to one’s perception skewing reality.

My first mistake was a common one – I falsely believed that some level of intelligence could improve the odds of winning a game of chance. This is known as an overconfidence bias. Rationally, I know this is flawed, but I was caught up in all the excitement.

One of the most noticeable biases I saw is known as gambler’s fallacy, which mistakenly believes that if something happens more frequently than it should in one period of time, the inverse will happen in the next period. As I noted before, just because people noted black had hit eight straight times is not a basis for it to land on red more times than black in the next eight spins.

You might be wondering how I did, which takes me to the next two biases to note. It took about 15 spins of the wheel before my $100 “investment” netted a grand return of -100%. Yes, I had lost it all. I experienced  anchoring, which is a cognitive bias whereas a person relies too heavily on the initial information to make a decision, and does not allow new information to change their decision. Before I started playing, I decided that I would always bet based on two things:

After playing, I quickly realized this strategy, given my stack of chips, was flawed, but I refused to change my style of play because I kept going back to my initial thoughts on how to play this game.

The other bias I noted in myself was the most difficult – loss aversion. Empirical evidence strongly illustrates that losses are felt much more deeply than a corresponding gain. If I had won $100 instead of losing it, I would not have thought much about it. An extra $100 is a nice bonus, but it will not change my life, but interestingly the $100 loss caused me considerable frustration. I went back to my room, sulked, and thought about the $100 all night and even the next day. I thought about what I could have done with that $100. What finally helped me come to terms with my loss was the recognition that I did something with the $100, I didn’t just lose it, I gave myself a refresher course on biases, which is immensely valuable.

Being able to understand and detect biases will not only help you with any game, but also in life. Biases will help you understand yourself, and why people have a tendency to make decisions in a certain fashion.