Why North Korea Is A Hot Topic Right Now 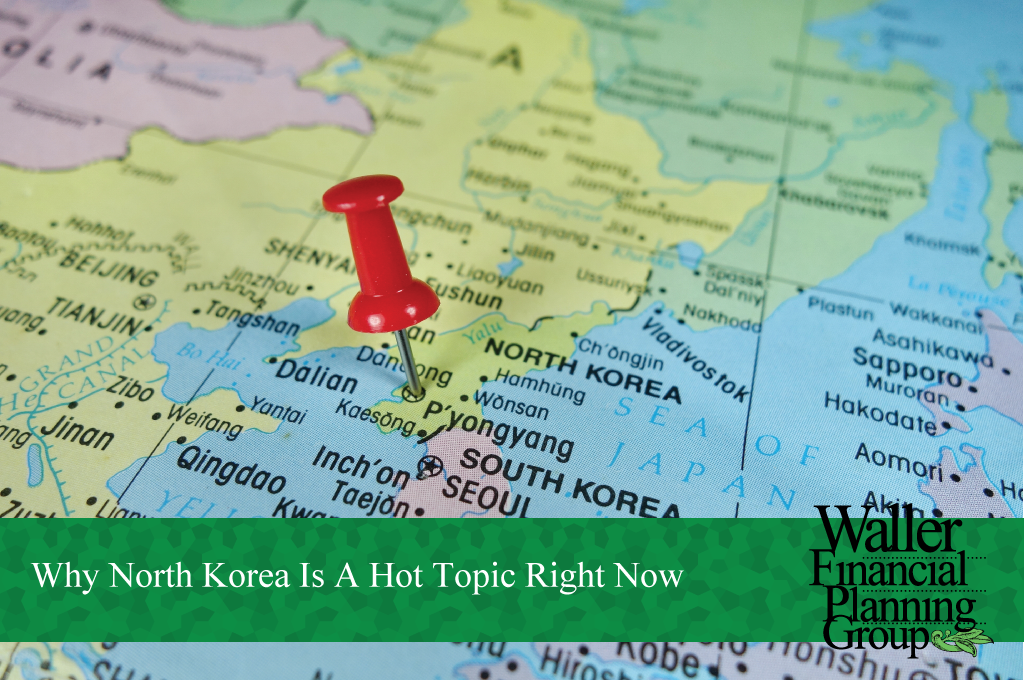 Last week, North Korea was the major headline and dominated the investment markets. With Pyongyang’s continued pursuit of developing long-range ballistic missiles capable of carrying a nuclear payload, world leaders issued a harsh warning and imposed even greater sanctions. The U.N. Security Council vote was notable because all 15-member countries voted unanimously to impose the sanctions, which included China and Russia. The intent is to choke off North Korea’s ability to trade internationally, which is how they fund their weapons program.

Historically, diplomatic efforts and economic sanctions have been rather ineffective at curtailing Pyongyang’s weapons program. It is fairly clear that “the Kims,” now led by Kim Jong Un, do not seem to care about the plight of the people of North Korea, as they have allowed millions of people to starve just to continue its weapons program. So, why will this time be different? With China and Russia theoretically on board, their ability to restrict trade is a much more useful tool. North Korea exports about $3 billion dollars annually, with the two main trading partners being Russia and China. These new sanctions could reduce that figure down by $1 billion.

The Kim family has long been thought of as narcissistic and unpredictable. For years, they have continued to ignore warnings from global leaders to cease its weapons program. They fully believed the option of using military force in the Korean peninsula would be nothing more than an idle threat because of the sheer devastation it would cause. Given how bad this option is, the Kims have continually made agreements and broke them without fear of losing power.

It’s pretty clear we now have a U.S. administration that does not do things in a traditional and rational fashion. It has been said when negotiating, a crazy person can win because they can force a rational one to make concessions in order to avoid a disaster. The Kims have long been irrational, and now the U.S. has a president that has shown to be erratic.

The markets have reacted in a predictable manner, as the uncertainty of the situation weighted negatively on stocks prices. Last week, the CBOE Volatility Index (a measure of short-term market risk) jumped more than 50%. It was the largest weekly increase since December 2015. Last week was also the second worst week for stock returns for the S&P 500 Index this year.

CNBC posted a chart, which shows how investment markets have reacted to significant historical events. It is important to note that there is no clear correlation to how markets perform after the initial shock is priced in, which usually results in a sell off the day of the event. This is significant because it again reiterates panicked selling has done nothing more than realized losses. In 12 of the 18 significant events highlighted, the market was higher 250 days later. 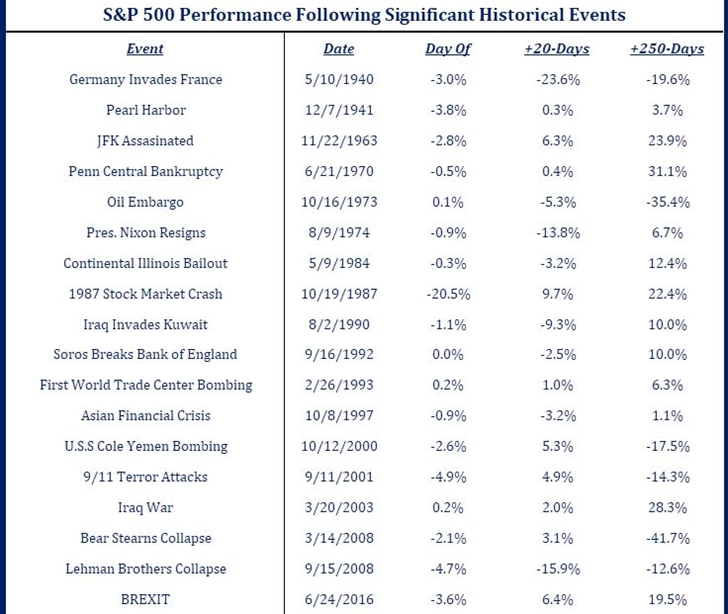 We are not feeling as concerned about the situation in North Korea for a few reasons: Despite the president’s rhetoric, we have not seen any change in U.S. Naval forces, nor has the State Department evacuated nonessential personnel from South Korea. If a military confrontation was imminent, we would see activity in those two areas. Moreover, military action on the Korean peninsula would significantly impact China. It would see many North Koreans fleeing into the country, which they do not want. Additionally, the destabilization of the Pacific Rim is something China very much wants to avoid.

We note with great importance an editorial issued in a state-run newspaper in China regarding its protection of North Korea.  In 1961, China and North Korea signed a treaty that outlined they would undertake measures to protect each other if one country came under attack. The editorial clearly signaled that China would not support North Korea if it fires missiles at Guam, a U.S. territory. As China continues its pursuit to be a world superpower, this flare up with two erratic leaders gives Beijing an opportunity to demonstrate on a world stage its ability to influence geopolitical outcomes.

Now that the markets have digested the initial shock, they appear to be ready to re-focus on economic fundamentals. There are a number of major keys to pay attention to this week, most notably, the release of the Federal Reserves minutes from the meeting in late July. Thus far, we have continued to be pleased with the resilience of the U.S. economy, which has continued to grow, albeit at a slow pace. We have also continued to see companies post earnings higher than expected. The point we want to reiterate is we cannot time the markets and the probability of something good happening when trying to time the market is related to luck, not skill. Economic fundamentals ultimately drive stock prices, not geopolitical rhetoric.